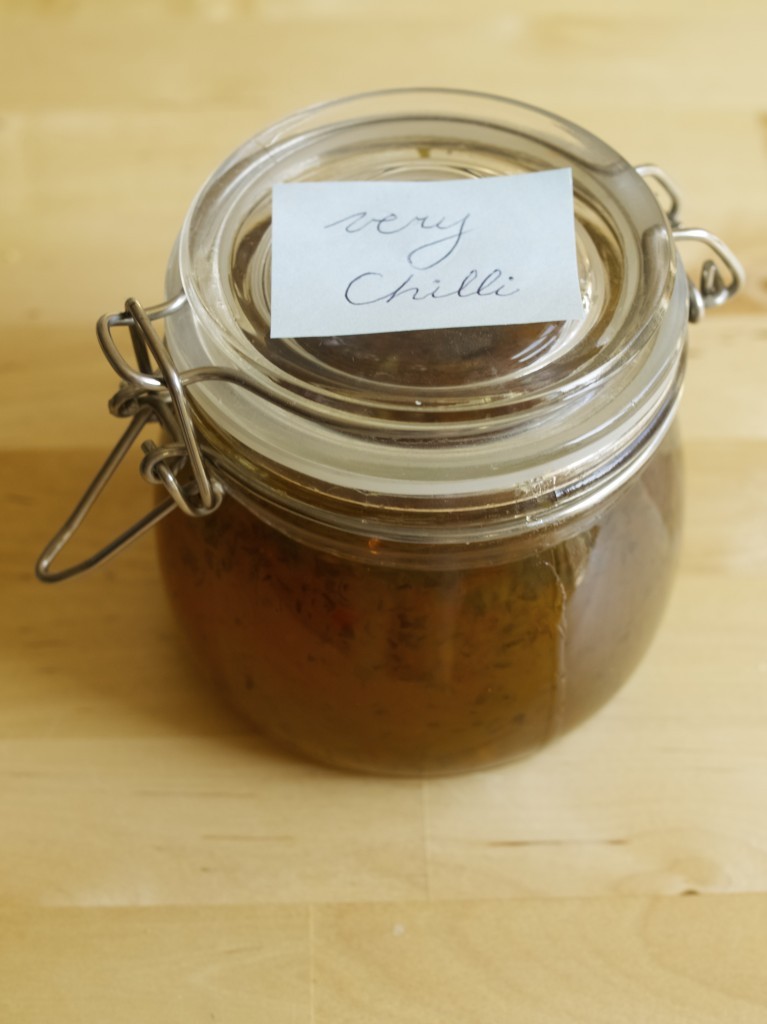 Joni is a big fan of chilli jam (now i’ve tried it and have become a fan as well!). He had a batch of red chilli jam that he finished a long time ago and he was enthusiastic (more like constantly reminding me) that we get some chillies so he could make a new batch (the previous batch was lovingly made by his mum) . I eventually got green chillies for our house warming party as I was making some Enchiladas. Luckily there were plenty leftover due to generous deals at Bedford market!

So we both agreed that green chillies are perfectly fine to make not so red chilli jam. We did hope however it would be bright green in colour the way red chilli jam is brightly red. However it turned out amber, I guess this is because we used darker cider vinegar.  We tried it with some enchiladas and loved the taste. This is how I got converted to be a chilli jam fan!

Joni made this last weekend. It took him a few hours to deseed and chop all those chillies. If you want to try this I really recommend you use gloves.  Even though these were not the hottest variety of chilli’s, it took about 12 hours for the burning effect to wear off. So make sure you wear some gloves to protect yourself from misery while making this very chilli jam (read Joni’s warnings and notes at the end of this recipe).

1. Put the chillies and peppers into food processor and pulse until they are finely chopped. 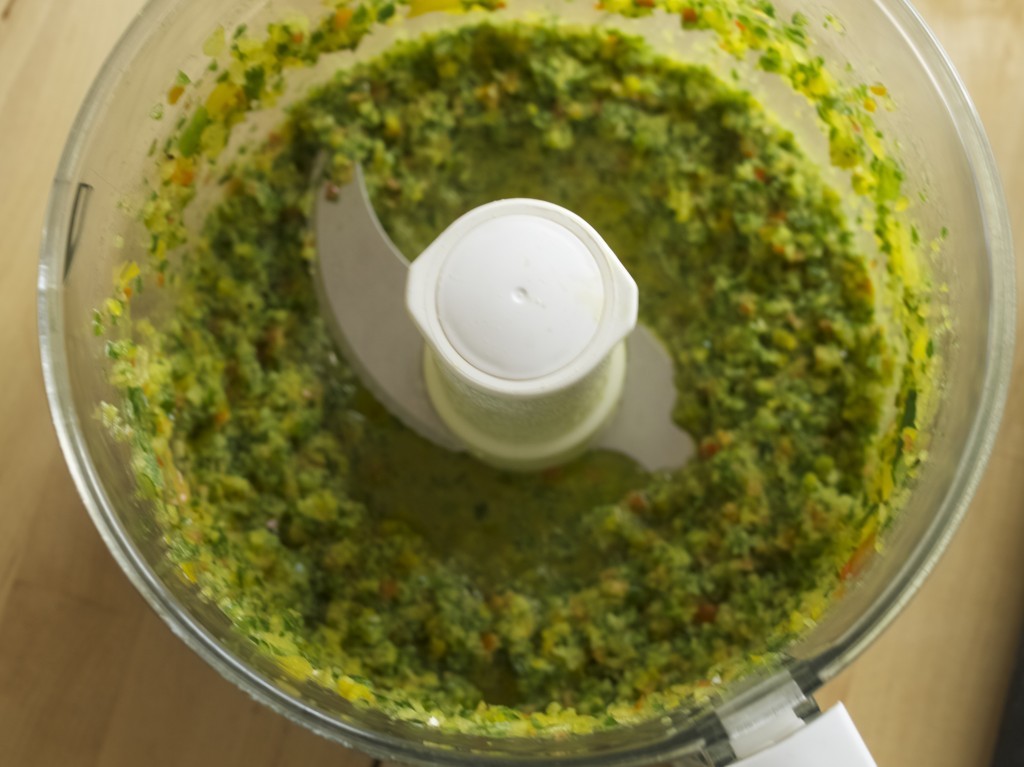 2. Dissolve the sugar in the vinegar in the sauce pan over a low heat without stirring.

3. Scrape the chilli-pepper mixture out of the bowl and add to the pan. Boil everything for 10 minutes.

4. Take the pan off the heat and allow it cool. The liquid will become more syrupy, then from syrup to viscous and from viscous to jelly-like as it cools.

5. To sterilise the jars heat them in preheated 100C oven for about 15 min. Pour the chilli jam into the jars and seal them tightly.

De-seeding the peppers is rather straightforward.  Insert your knife on the top next to the stalk and cut around to remove.  Pull it out and then halve the pepper. Discard the stalk and the seeds from inside.  Trim back the seed structure to the inner wall of the pepper and then roughly chop the pepper flesh into segments ready to go into the food processor.

De-seeding the chilli’s is simple in practice but warrants caution.  Even relatively low Scoville scale chilli’s have capsaicin oil in them.  The more chilli’s you chop the more oil will be deposited on your hands and chopping board and this can be very nasty to deal with.  If you are not wearing gloves you will suffer some excruciating time until you can get the oil off.  Olive oil is supposed to help dissolve some of the oil so it can be washed off with soap.  I didn’t find this very effective.   I de-seeded the chilli’s by chopping off the stalk and then halving the chilli lengthwise.  This allowed me to scrape the seeds and seed structure from the inside of the chilli.  I then roughly chopped the remaining flesh ready for the food processor.

I’m sure you could play around with the relative proportions of peppers and chilli’s as well as choosing different types to alter the flavours.  It strikes me as very simple to do and could give you jam of strikingly different colours, texture’s, flavour, & all important chilli heat.

I dissolved the sugar in the cider vinegar as Nigella’s recipe required.  I have an electric hob so once it reaches a heat it can often overheat.  Heating up the sugar and adding the blended chilli and pepper mixture was easy but i think i overheated the sugar and some of it caramelised which i think led to the amber colouring rather than the jam taking it’s coloration from the chilli.  If you have a gas ring and better temperature control you may get a better result.  Do let us know how you get on. 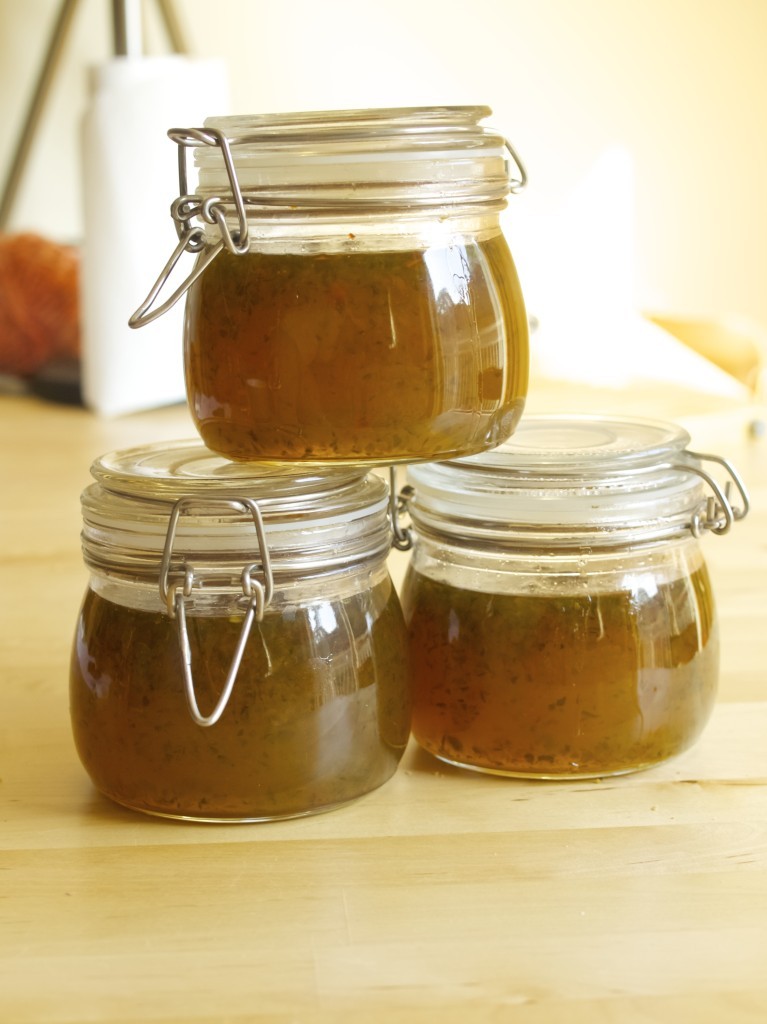